Leonardo DiCaprio Ages, His Girlfriends Do Not

I spend many hours a day in front of the PC looking for great content, but even don’t see a gem like this very often. I’m talking about this beautiful graph displaying Leonardo DiCaprio’s age (which is linear – hard to believe, eh?) and the age of his girlfriends over the past 20 years. You’re about to learn that Leo redefines what we know about space, time and age itself!

So what are the main takeaways here? First of all: Leo doesn’t date women, who are older than 25. Future might teach us something different, but if the past has thought us something, it’s that he stops dating women, when they hit the age of 25.

62,5% of his girlfriends are or have been Victoria Secret models. Now that’s a ratio to boost about when you’re talking with your boys.  Damn, son. His “first” world-class model girlfriend Gisele Bundchen (who’s now married to Tom Brady) became the highest paid model of all times. Peaking at around 25 million USD/year – now with a net worth of around 380 million.

In the year 1997 Leonardo DiCaprio was 23 years old. His current girlfriend model Camila Morrone was not born yet. 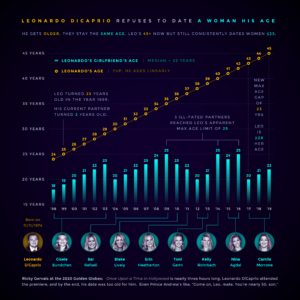 At the age of 45 Leo also reached the biggest age gap to his girlfriends yet. He’s more than twice the age of his current girlfriend Camila Morrone.

This clip is the perfect fit for our graph. It’s from the 2020 Golden Globes, which took part just three days ago. Watch what Ricky has to say about Leo and the age of his girlfriends:

At least he takes it with humor, even though I believe he had no other chance than to smile at that moment. It certainly was a perfect joke at Leonardo DiCaprio’s expense.

2024 will be a very interesting  year. You’re probably asking yourself right now: “What’s going to happen in the year 2024?”. Well that’s the year his current girlfriend will hit the magical ceiling that is the age of 25. The age all his previous girlfriends had been shown the door. Yet, the latest rumor about the couple claim, they’re talking about marriage and kids. Smart girl Camila told the press she wants go get married before she has kids with Leo.

If this were to become reality, I bet we will see Leo play some Golf with Tiger Woods and ask him how to avoid the dangers of a no-prenup marriage. I bet Tiger will be able to give him some very valuable tips about this.